Last Thursday, the students in my Museums, Monuments, and Memory course unveiled their exhibit to the public. The theme of the exhibit was 1968 (with a U.S. focus) and included panels on civil rights, the United Farmworkers, gay and trans rights, American Indian rights, feminism, college protests, the Democratic convention in Chicago, the presidential election, the Cold War at large and Vietnam in particular, culture, music, and the environment. 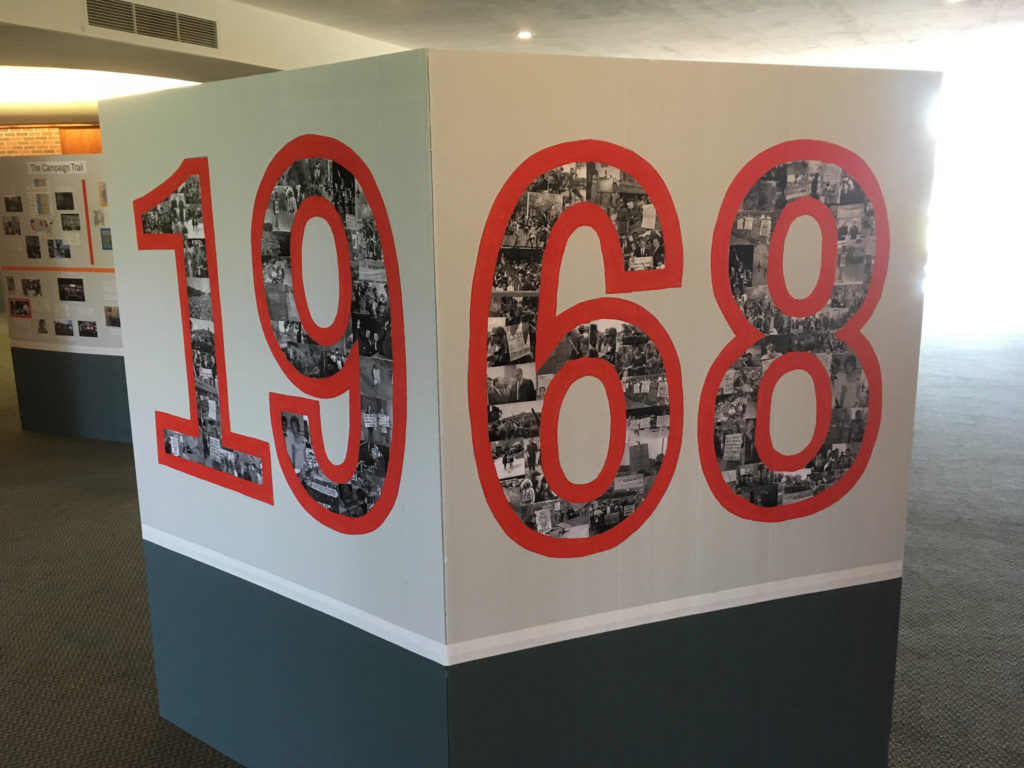 The students had built the exhibit from the ground up, crafting boards out of insulation panels, caulk, and several coats of paint, and had decided upon the layout of the exhibit, the color scheme, and the font on the labels as a collective. They did remarkable work, digging deep into primary sources from the era, selecting images, and designing panel layouts to make their arguments clear and memorable.

But what many people might not expect is how much they wrote.

Museums, Monuments, and Memory is – perhaps surprisingly – designated a writing-intensive course in the department. But that’s only surprising if we think that student writing is largely assessable by volume rather than quality and process. As I explained to the students at the beginning of the term, their task was do the research necessary to write a twenty-page, primary-source research paper . . . and then distill it down to fit on a 3.5 inch index card.*

Part of what makes it possible are the images that accompany our exhibit labels. The students strive to make their argument clear from the images they select and their placement on their panel so that their text can hone in on the most important information to relay to a guest. (This also makes them critical consumers of books and journal articles after the fact, reading the interplay between illustrations and text as well as the content communicated by each.)

But what also makes it possible is that students draft, redraft, and draft their labels again, asking each other’s help, getting feedback from me, and thinking carefully about every word they commit to a text box. They are meticulous about the process in a way that they rarely are with a twenty-page paper – sentence structure and word choice matter when you’ve only an index card’s worth of space. It’s easy to lose sight of that word-by-word diligence when you’re crafting a longer argument, as I know only too well from my own writing.

All of which has led me to ponder making index-card arguments central to the way I teach longer seminar papers. In the fall, when I teach Women, Gender, and the American Revolution, I’m toying with making the final paper due a week before the end of classes and the last exercise in the course the condensing of that paper into museum copy. It will encourage an elasticity of thinking in my students, remind them that audience matters, and also make them attentive to what they have or have not said clearly.

I’ll report back on how it goes. Right now I’m reviewing my students’ work from throughout the term in order to award them the grade their efforts have earned. I’m giving them credit for painting and sawing and lifting panels, for thinking about visual communication, and perhaps, most of all, for writing down a world of knowledge on an impossibly small index card.

* the index-card rule was designed to allow students to approximate how many words they had to play with. The actual text they put on panels could be 11 inches wide, if they wanted, but the index card was our go-to example of the kind of brevity for which they were searching.