The other day, Jesse Stommel tweeted a thread about how we train our graduate students to teach. It got me thinking about my own experience, and how much work graduate programs need to put in to make sure we do better.

I was 22 years old when I first began teaching. I was an English, first-generation, immigrant graduate student, brand new to the American system of education, and just six weeks past my own graduation with a BA in American Studies. I didn’t know the term “imposter syndrome” at the time, but I had it in spades. I had no training in teaching, and at the little bit of orientation we teaching assistants were given, a faculty member told us not to worry – that as long as we read the textbook a week before the undergraduates, we’d be fine. This was the take-home from our training. I was then promptly set down in a classroom: six discussion sections a week; 120 students a semester.

I was terrified. I had the barest training in the content I was supposed to deliver, 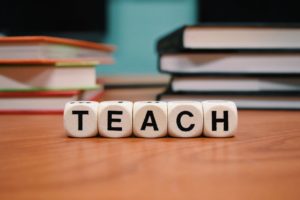 and absolutely no idea how to get students to talk to one another. The best I could do in terms of holding a room was to imagine I was Dana Scully from the X-Files, because she would (I told myself) kick ass and take names. My own undergraduate instructors had not been good role models for teaching, preferring that we intuit how to write papers rather than be taught how – some bizarre form of gate-keeping, I think now. I was lost.

I do remember that I thought teaching was about power – about demonstrating that I had more of it than my students, and they should be afraid of it (and, by default, me). I was taught that teaching was fundamentally antagonistic, and I ran my classes on the sharp edge of cutting remarks and sarcastic comments, and bluffed when I didn’t know the answer to a question. I raised my voice and graded harshly – I replicated everything my undergraduate professors had done. And then I went to a new graduate program and someone told me that the way to “control” a classroom was to be a bitch on the first day so that the students never wanted that person to come back again. I actually thought that this was excellent advice at the time.

(I remember very clearly the day that a non-traditional student came up to me to explain that he’d missed the previous class because of a water-pipe bursting at his house. He had to stay home and get it fixed. Parroting what I had been told by a faculty member, I told him that he had made a choice that day about what was important to him, and he’d chosen something other than class. I would not excuse his absence.

I look back on that now and want to shrivel into a ball and hide under my couch.)

While I learned by trial and error what worked and what didn’t – and was a quick study on each – those early students deserved better. I wish I had had a teaching mentor to turn to, someone who could give me advice and remind me to be kind. But so many of us are taught as our advisers were taught – by mimicking the teaching practices of those who came before us (which means it’s no wonder so many classes are run as if it’s still 1904).

We have to invest in teaching our graduate students how to teach – and if we ourselves have no idea where to begin with that enterprise, that tells us something really important about our own teaching practices. It should not be hard for people whose livelihoods depend in part upon teaching to instruct others in pedagogy for a semester or more. That it is means the generations before us failed us as instructors; that it continues to be is down to us. We are not helpless in this. We can learn. There is a vast body of literature about what works and doesn’t in a classroom, and multiple experts at our disposal. We cannot simply throw up our hands and say, “I wasn’t trained for this.” That may be true, but we get to change it.

6 thoughts on “Teaching Our Grad Students How to Teach”